The continuous influx of international migrants during the last decades diversified the populations of many European cities. While much has been said and written about ethnic diversity, so far only little attention has been paid to the changing religious landscapes of those cities that are the hubs of international migration.

International immigration became the undisputed driver of demographic growth in many European cities. A continuous influx of international migrants does not only affect the age structure, it also – often drastically – changes the ethnic and religious composition of urban populations. Although it is argued that religious self-identity is the most enduring trait of immigrant populations and their descendants (Baumann 2002), the importance of religion as a dimension of social diversity has yet gained only little attention in social sciences and in the public opinion – in sharp contrast to the often stressed ethnic dimension.

The rather under-researched topic of the role of religions in shaping the social and demographic structure of urban populations has been taken up by the research project WIREL, which aims to reconstruct, analyse and forecast Vienna’s religious composition over a period ranging from 1951 to 2051. First findings (see WIREL presentation and infographic) show that the religious diversity of Vienna has strongly increased over the course of half a century. In 1951, Vienna was a highly homogeneous city with respect to religious denomination, as can be seen in the figure below. 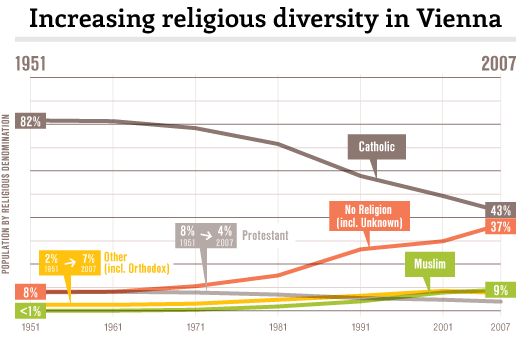 Source: Goujon et al. 2012 (based on data by Statistik Austria and Statistik Wien)

Vienna’s Catholic majority of more than 80 per cent in 1951 became a minority by the turn of the millennium, while the share of the secular population (no religion), which accounted for less than ten per cent in 1951, is already challenging the Catholics as the strongest “denomination” in the city. Beyond the significant trend in secularisation, the continuous influx of international migrants increased the city’s share of Orthodox and Muslim sub-populations. The two population pyramids below illustrate this emerging religious diversity, confronting the distorted age structure of the still catholic-dominated population of Vienna in 1971 (above) with the much more diversified and, literally, more colourful population of 2001 (below). 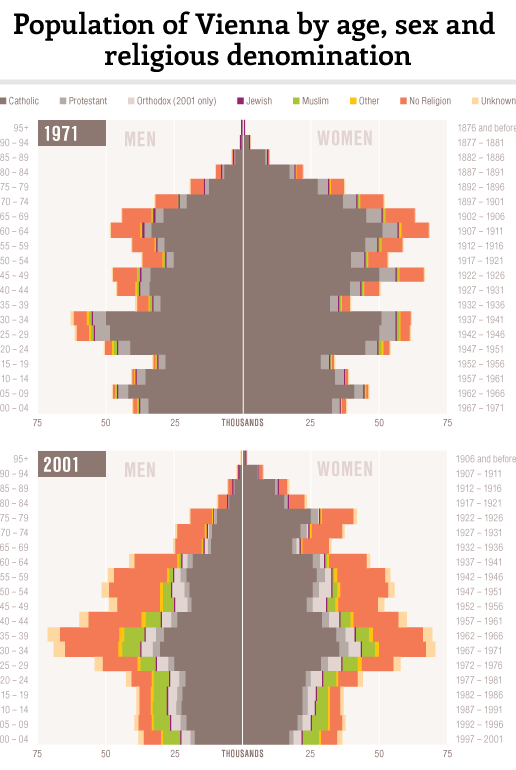 Source: Goujon et al. 2012 (based on data by Statistik Austria and Statistik Wien)

The researchers of the WIREL project (under the direction of Anne Goujon, and including also myself among others) clearly point out which forces are shaping the religious composition of Vienna:

“Secularization and international migration have been the main factors shaping Vienna’s changing religious landscape. More restrictive and selective migration as well as the resurgence of religion (Kaufmann 2010) may mean that the extent of fertility differentials by religious denominations and of exogamy could play the major roles in determining the future religious composition of Vienna.”

Vienna, which experienced no significant population growth, but rather decline and stagnation during most of the second half of the 20th century, literally became an old and monotonous society in the post-war decades – not only in terms of religious denomination. Various and continuous waves of international migration dramatically changed the age and religious composition of Vienna’s population (see pyramids). First arrived the so-called Gastarbeiter (“temporary workers”) during the 1960s, mostly from the former Yugoslavia and Turkey. However, only since the 1990s Vienna’s population also increased in size, when international migration gained even more momentum due to family reunification of the gradually settled (and definately not returning) Gastarbeiter, the opening of the former hermetically sealed communist countries behind the Iron Curtain (in 1989), the Yugoslav Wars (1991 – 1995), Austria’s accession to the EU (in 1995) as well as the European Union’s latest expansion to Eastern Europe in 2004 and 2007.

It remains to be seen how further secularisation and international migration will affect the religious composition of Vienna and other European cities that experienced similar developments. Certainly, and as assumed by the preliminary WIREL findings, the prevailing religious diversity of Vienna is already reflected in diverging patterns in demographic behaviour: some religious denominations show significantly higher fertility rates as well as distinct differentials in inter-religious marriage behaviour. On the one hand, such differentials might even increase in the future due to the inter-generational transfer of religious denomination and, by implication, a particular demographic behaviour too. On the other hand, a more accelerated social integration, which implicates an increase in inter-religious partnerships, might result in converging demographic behaviour and diminishing cultural differentials, at least in the second or third generation of the new arrivals.