Vienna has a growing democratic deficit. As long as voting rights are linked to citizenship, overly strict naturalisation requirements are weakening democratic participation. This is especially the case in countries of immigration, affecting first and foremost cities that are hubs of international migration – such as Vienna.

A series of Metropop blog posts and visualisations have already addressed the phenomenon of Vienna’s shrinking electorate. In fact, the city’s widening electorate gap is due to the fact that the growth of the city’s electorate cannot keep up with its population growth. This post examines the impact of Austria’s strict citizenship law on the size of Vienna’s electorate.

Although Vienna’s population grew by 16% between 1981 and 2014, the city’s electorate shrunk by 2% during the same period. Vienna’s democratic deficit is growing because voting rights are linked to citizenship – only Austrian nationals at voting age are enfranchised. Since the city’s population growth is almost entirely driven by international immigration, fewer and fewer residents are eligible to vote. Already one out of four people at voting age will be unable to participate in the citywide 2015 Vienna elections (to be held on 11 October).

A major factor for the widening gap between Vienna’s population size and the size of its electorate is that many international migrants remain foreign nationals even after years of residency in the city. One reason is that Austria has a relatively restrictive nationality law. Fist, citizenship is based on the principle of jus sanguinis, which means that Austrian-born children of foreign nationals are not automatically granted Austrian citizenship at birth. Second, citizenship is granted only to applicants who meet a range of requirements.

In 2006, an amendment of the Austrian nationality law made naturalisation requirements even stricter. This includes for example a minimum continuous residence of 10 years, knowledge of the German language (at B1 level), irreproachability (which also includes administrative penalties), a relatively high level of income, and the renunciation of foreign citizenship. Consequently, naturalisation rates and numbers have plummeted since 2006 and remained on a very low level ever since. 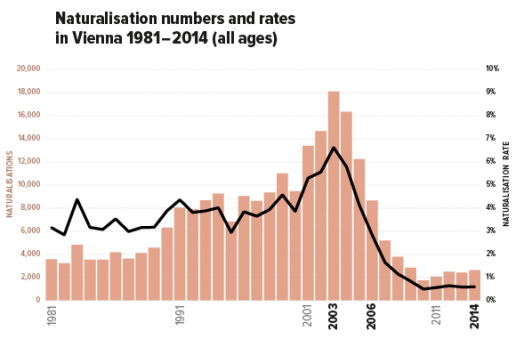 More than 40% of all foreign nationals in Austria are living in Vienna. Naturalisations have peaked in Austria’s capital city in 2003, simply because many migrants and refugees from former Yugoslavia who have arrived during the early 1990s had met the required minimum period of residence by then to become eligible for citizenship.

Since the amendment of the citizenship law became effective in 2006, the naturalisation rate (i.e. naturalisations per 100 foreign nationals) strongly declined: from more than 4% (in 2005) to just above 0.5% (in 2014). Since 2010, on average less than 2,400 foreign residents of Vienna have been granted citizenship per year. And the majority of these new Austrians were actually born in Austria.

Less naturalisations mean less Austrian citizens, and less Austrian citizens mean less eligible voters. In a growing city like Vienna, less eligible voters mean a growing democratic deficit (as already discussed here). Since the implementation of the stricter naturalisation requirements in 2006, Vienna’s population growth has even accelerated, driven by increased international immigration. Between 2005 and 2014, the city’s population has grown by 8.5% while the electorate has gained just 2.8%. However, the number of the people eligible to vote would not have increased at all if the lowering of the voting age from 18 years to 16 years would not have added 27,948 additional persons to the electorate in 2007. 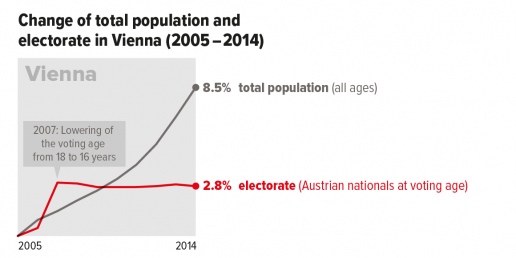 What if naturalisation rates would not have declined? How many more people would have been added to Vienna’s electorate since 2006? Aiming to answer these questions we elaborated three scenarios, which illustrate the impact of the tightened citizenship law since 2006 on the size of Vienna’s electorate in 2014. For this reason, we just considered naturalisations of people at voting age – i.e. 18 years and older for 2006 and 16 years and older from 2007 onwards. 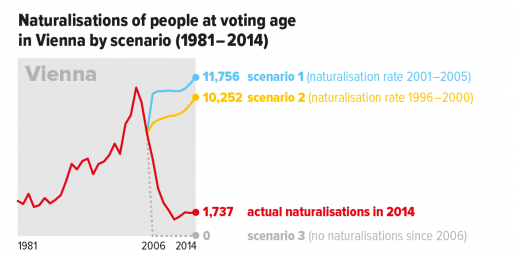 In both main scenarios (1 and 2) the number of naturalised Austrians among Vienna’s residents by 2014 is several times higher than the actual numbers observed since the amendment of the nationality law became effective in 2006. During the eight years between 2006 and 2014, just 21,317 foreign residents in Vienna at voting age were granted Austrian citizenship.

So, let’s assume that the naturalisation rates observed during the period 2001–2005 (i.e. just before the requirements were tightened) would have continued after 2006 (scenario 1). In this case more than four times more foreign residents at voting age (98,028 persons) would have received Austrian citizenship. Consequently, Vienna would have had 76,711 more eligible voters by 2014 compared to the actual figures. When applying the slightly lower rates of the period 1996–2000 (scenario 2), in total 81,639 foreign residents at voting age would have been naturalised between 2006 and 2014. As a consequence, Vienna’s electorate would have added 60,322 more eligible voters by 2014. 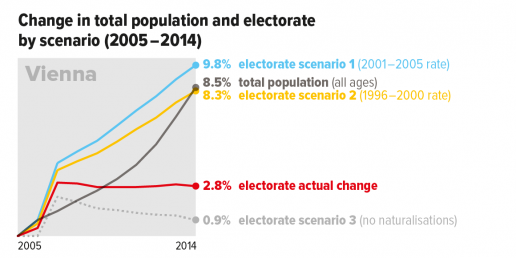 The chart above illustrates the consequences of the stricter naturalisation requirements that became effective in 2006 on the size of Vienna’s electorate in 2014. As already mentioned, Vienna’s total population (all ages and nationalities) increased by 8.5% between 2005 and 2014 (dark line), while the city’s electorate grew only by 2.8% (red line).

To put it plainly …

Vienna’s widening electorate gap is due to fact that voting rights in Austria are based on citizenship. The democratic deficit in Austria’s capital city has even become more severe after naturalisation requirements were tightened in 2006. So, how to narrow the gap between the city’s total population and its electorate?

On the one side, the consequences of citizenship laws need to be reconsidered. Too strict naturalization requirements literally produce more foreign nationals, which in turn leads to a diminishing share of residents eligible to vote. Given that the majority of naturalised persons in Vienna since 2006 were actually born in Austria, obviously jus sanguinis should be dropped in favour of jus soli, which would grant citizenship to everyone born in the country. On the other side, democratic participation could be strengthened if citizenship and voting rights would be decoupled. This is especially the case in countries and cities with a high share of international migrants. Voting rights that are bound to residency (e.g. after a stay of 3 years) would much better reflect the reality of a society shaped by immigration.

Although both options would make a lot of sense, the political reality in Austria is that neither a liberalisation of the citizenship law nor a voting law based on residency would find a legislative majority. However, without any reforms of Austria’s citizenship law and/or voting law Vienna’s electorate gap will definitely become even wider in the future.

The global flow of people